Ibogaine is a highly psychoactive compound found in a few unique plants, most notably, the Tabernathe iboga — which is a shrub that can be found scattered throughout Africa. Traditionally, iboga has been used for its restorative and psychoactive properties by West African tribes for thousands of years for its ability to soothe and heal troubled minds and bodies. The first report of iboga used in the westernized world was back in the latter half of the 19th century among the Belgian and French explorers who observed spiritual African ceremonies.

Fast-forward a few hundred years into the 21st century, and you’ll find that ibogaine is starting to become mainstream for the treatment of drug addiction and withdrawal for narcotics like opioids, cocaine, amphetamines, and liquor. In fact, there are hundreds of treatment centers that now offer ibogaine as a natural treatment to help patients detox by easing their cravings and withdrawal symptoms.

Where Is Ibogaine Legal?

Before we dive into the deep end of Ibogaine legality or determining where ibogaine is legal — we first need to determine the different legal status types and the distinctions between them. A controlled legal substance is when the manufacture, use, transport, and possession is regulated by a federal or local government like prescription medication. A Legal substance means it’s not regulated but it’s fully legal to possess, use, sell, and make. Illegal, of course, means a particular drug or substance is banned from being sold, used, or possessed in any capacity. If a substance is unspecified, it means it isn’t regulated, or there aren’t any current laws or legislation governing its use, making them a literal grey area about whether or not its use is legal or illegal.

But you’re probably wondering where ibogaine is legal? To get technical, New Zealand is the only country where it’s completely legal in all capacities (possess, sell, transport, cultivate). In Uruguay, Iboga is legal to possess, but it remains a controlled substance regarding the sale, cultivation, and transportation. Ibogaine legality in Australia, Brazil, Canada, Hungary, and South Africa is allowed but controlled. It’s illegal in Belgium, Finland, France, Ireland, Israel, Italy, Norway, Sweden, Switzerland, and the United States. In terms of ibogaine legality, the Netherlands, Mexico, Germany, Costa Rica, and Gabon don’t regulate it; meaning it’s not technically legal or illegal.

Which U.S States or Cities Have Decriminalized Ibogaine?

It’s true that ibogaine (and marijuana for that matter) are illegal on the federal level — however, the 10th Amendment in the United States Constitution gives local states and cities the power to vote on laws and ordinances. Currently, Oakland, CA, Somerville, MA, Santa Cruz, CA, and the entire state of Oregon have decriminalized all federal Schedule I psychedelics, including ibogaine. Just a few days ago California State Senator Scott Wiener introduced a bill to decriminalize psychedelics in the entire state of California.

The good news is more and more cities and states are starting to follow the ibogaine legality suit; almost 100 more cities are considering decriminalizing psychedelics in 2021 including Atlanta, Chicago, Salt Lake City, New York, Philadelphia, and Dallas to name a few.

Countries We Do Retreats

Root Healing provides Iboga Retreats in Thailand and Portugal, where ibogaine is not regulated. All ceremonies follow the traditional Missoko Bwiti method. All of our retreats last 7 days and we provide integration counseling for continuing care. This entire process is the most optimal path toward healing.

Comments, questions, or concerns about us or our retreats? Feel free to reach out and contact us at any time!

We can thank the UN 1971 Convention on Psychotropic Substances for the rigid ibogaine restrictions which sought to suppress all psychedelic substances including ibogaine.

Until now, psychotropic substances were mostly illegal throughout the world, but as times are changing, so are mindsets and biases. More countries like the United States are starting to hop on the bandwagon of decriminalization including Canada, Australia, Brazil, Denmark, Hungary, Portugal, South Africa, which allow it in a controlled aspect. The United Kingdom is a bit of an outlier because Ibogaine is not listed in the UK’s Misuse of Drugs Act 1971, but it is listed under the Psychoactive Substances Act 2016 provisions. This means it’s unlawful to export, import, supply, or produce any psychoactive substances —  but it’s not illegal to use them. To date, there have been no reported cases of anyone being prosecuted for the use or possession of ibogaine.

As more and more localities around the world begin to decriminalize drugs including Schedule I Psychedelics like Ibogaine, more and more acceptance, research, understanding, and healing will begin to take shape.

That being said, the decriminalization of psychedelics has been no easy feat —  over the years countless advocates, researchers, and campaigners have fought for not only access to the benefits psychedelics have to offer, but simply for the opportunity to have an open conversation. Will it lead to a mass decriminalization or ibogaine legality movement? Only time will tell, but to us, the future sure is looking promising.

Fill out this form if you have any questions or if you want to learn more. 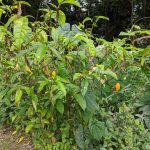 Iboga Plant: History of Use